There are only two hard things in Computer Science: cache invalidation and naming things.

I’ve just seen too many times developers using Dependency Injection frameworks like Spring or Guice or Dagger the wrong way. Naming classes with Impl suffix is an Anti-pattern and i’m going to explain why.

Why Impl is Bad

ServiceImpl is a common practice

Many developers, including myself years ago, are using the Interface + Impl pattern to create services which are injected by their interface. This usually looks like this: 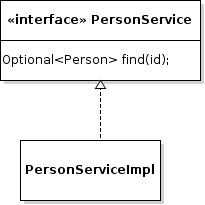 Interface and its associated implementation

I think many developers simply don’t understand the point of dependency injection because they are just doing Impl services. I strongly agree with this: there is no point of creating an interface for a service which has only a single known implementation. Decoupling for the sake of decoupling has no sense.

Many things are wrong with this:

In fact, naming an implementing class with the Impl suffix is a tautology. Every concrete class is of course an implementation of something. It’s like naming the service interface IPersonService, the I prefix brings nothing more than noise to the name.

All modern Java IDE already point the different between implementations and interfaces in their UI. 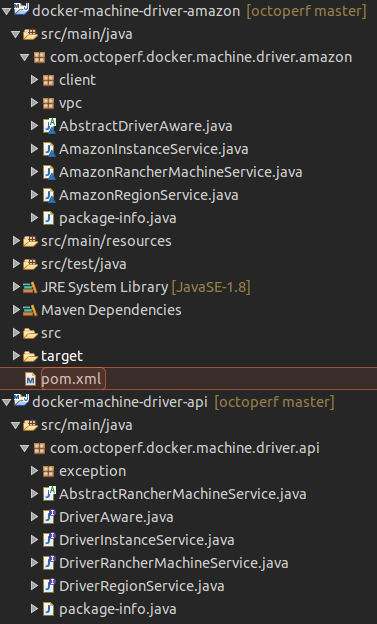 Naming a class with the Impl suffix is like telling I don’t know how to name it. If you can find a simple name for your implementing class, it’s a sign of code smell. Things that can’t be named properly are either too complex or doing too many things, thus usually breaking the Single Responsibility principle.

By shipping both the interface and the implementation tied together, you will never be able to replace the implementation with another without editing the code. That’s what most of the developers don’t understand, because they’ve just shipped interfaces with Impl all their life.

Shipping interface and its implementation together is like shipping rims with unreplaceable tires. Who wants this?

Let’s consider one of the most common interface used by Java Developers: List. There are several implementations of the List interface: 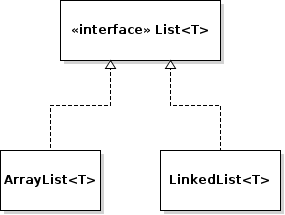 Have you ever seen a ListImpl inside the JDK? No, you don’t. Why would you name your classes with the Impl suffix then?

This is where the API pattern comes to the rescue. We’ve seen that most developers just ship interfaces with their associated Impl together. The API pattern aims to separate the contract, namely the interface, and the implementation. This way, when you need to replace one implementation by another inside your application, you just need to swap the dependency pointing to the right implementation. No code change. 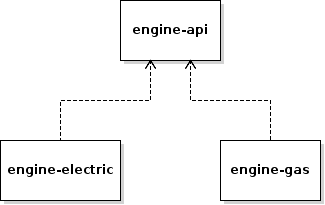 The screenshot above shows the Maven modules which have been created:

Any other maven module which depends on the engine only relies on the API.

A car relies on a Engine, without an assumption on the engine type

The beauty behind this pattern is that the car doesn’t care about which engine has been put under the roof. Each engine provide the same ignite method to start them. Implementing modules are only depending on API modules.

The final application module is responsible for wiring all the things together by specifying the implementation to use:

The API module provides the contract to implement, also known as interfaces in Java. It also provides the unit tests to verify that an implementation strictly follows the contract. It should never contain anything else. In this case, it’s the engine-api module.

One implementation module must contain one type of implementation. This is why we have the engine-electric and engine-gas module. Those modules only contain implementing classes of a given contract. These modules should never contain any contract as they already ship implementations.

I have created a full example application here: Design by contract. Suppose we want to model a Car which has an Engine. Nowadays, it’s possible to order a Car with a Petrol or an Electric engine. 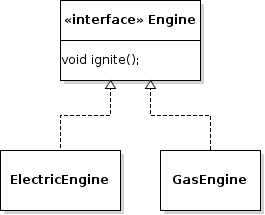 There is no EngineImpl. Would it be an electric or a Petrol engine? In this example, the implementations are quite obvious because the code relates to something physical. ElectricEngine and GasEngine have nothing in common, this is why each is in a separate maven module.

Both engines can be unit tested independently. Even better, the classes depending on an Engine instance can be unit tested too without being forced to use any of the implementations above. There could even be a TestEngine inside a engine-test module whose purpose is to provide an engine for the tests.

It often happens that your unit test may require some dependencies to be injected. It can quickly become a nightmare to get your service properly injected and started if all the dependencies are following the Impl pattern. The whole services tree will be initialized and there are big chances it will fail due to a missing resource like a database. This results in poor test isolation: the test is likely to fail when a dependency fails too. This is also known as cascading failure, and leads to hours of time wasted debugging.

On the other side, if all your implementing modules are depending only on API modules, then you can inject mock dependencies instead of the real services. All the services which need to be injected can be replaced by test classes, ensuring proper test isolation. If the test fails, you can be sure it’s because your service fails and nothing else. No time is wasted debugging obscure dependencies.

Example of an API providing a unit test

One of the greatest benefits of decoupling contracts (interfaces) from implementations (concrete classes) is the increased productivity:

This provides a highly parallelizable pattern which greatly helps to scale a development team. It reduces the wait time between the teams as everyone can get to work even if each team hasn’t finished their part yet. The only bottleneck is the API contract definition. One could even imagine delegating part of the developments by outsourcing the implementation of the required contracts. External developers can be in charge of providing an implementation to the exposed contract.

The goal of eliminating bad habits and practices in software development is to increase the development productivity and speed. Sure, we as good developers, like to work with pristine code. Why? Because it puts much less stress on our mind to work with well structured code. We can focus on shipping rather than messing around with bad code and wasting time debugging.