Most Spring Tutorials available online teach you how to secure a Rest API with Spring with examples which are far from real application problematics. You surely agree that most tutorials lack real-world use-cases.

This tutorial aims to help you secure a real-world application, not just another Hello World Example.

In this tutorial we’ll learn:

When the user logs out, the token is cleared on server-side. That’s it!

Let’s now briefly see how the maven modules are organized. Implementing modules only depends on API modules. It’s up to the application module (like example-simple) to tie the implementations together. 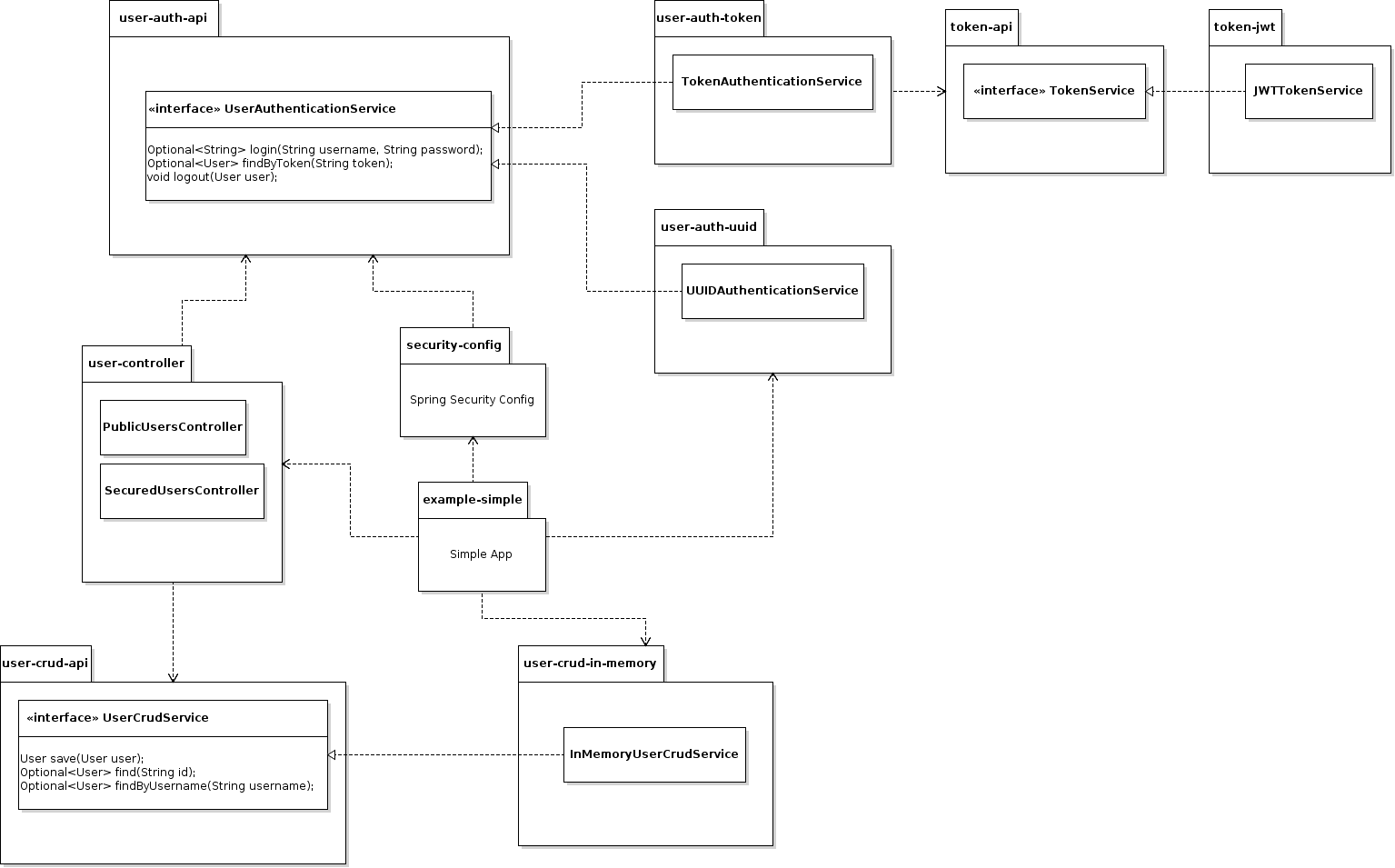 The architecture diagram above shows how the example-simple module interacts with the other modules. 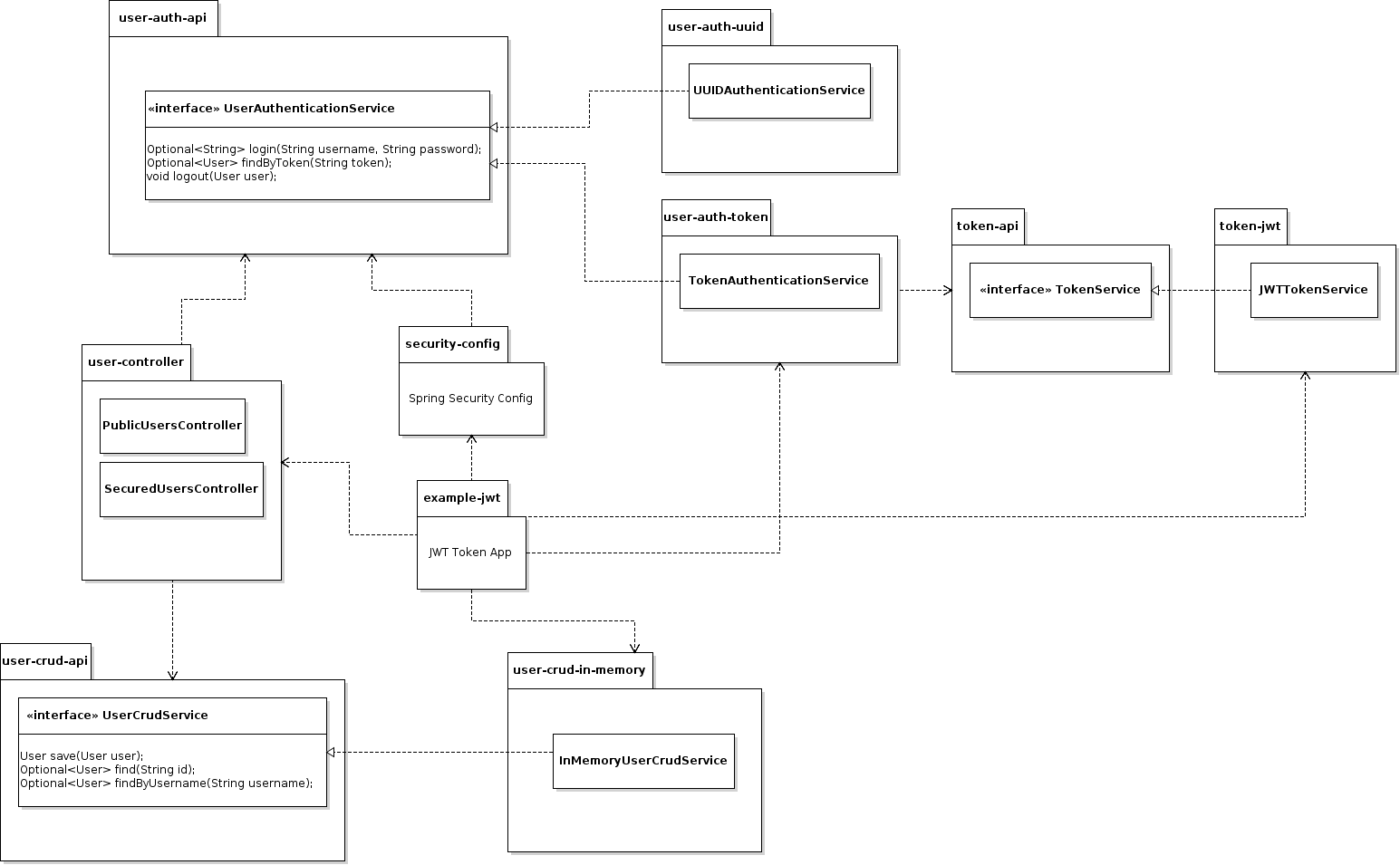 The main difference with the example-simple module are the dependencies on user-auth-token and token-jwt modules.

Now that we have an overview of the overall architecture, let’s dive into the code!

Let’s setup the root maven module with the following configuration:

In this example, we’re going to use Spring Boot 2.3 to quickly setup a web application using Spring MVC and Spring Security.

In this section, i’m going to cover the implementation of the code responsible of logging in and out users.

The User crud API is responsible of storing users somewhere.

As you can see, users are stored in Map<String, User> in memory. This is purely for demonstration purpose. Of course, a real application would be based on a UserCrudService storing users in a real database.

The user-auth-api contains UserAuthenticationService is responsible of logging in and out the users, as well as deliver the authentication tokens.

In this tutorial, i’m going to use 2 different implementations depending on the example we’ll see.

The whole Spring Security configuration is stored in security-config module.

As we’re securing a REST API, in case of authentication failure, the server should not redirect to any error page. The server will simply return an HTTP 401 (Unauthorized). Here is the NoRedirectStrategy located in com.octoperf.security package:

Nothing fancy here, the purpose is to keep things simple.

The TokenAuthenticationProvider is responsible of finding the user by it’s authentication token.

The TokenAuthenticationProvider delegates to the UserAuthenticationService we have seen in the previous section.

The TokenAuthenticationFilter is responsible of extracting the authentication token from the request headers. It takes the Authorization header value and attempts to extract the token from it.

Again, nothing fancy here. The code is pretty straight forward! Authentication is then delegated to the AuthenticationManager. The filter is only enabled for a given set of urls. We are going to see in the next coming sections how this filter is configured.

It’s time to configure Spring Security with all the services we defined above:

As you can see, everything is tied together in a Java configuration which is almost less than 100 lines everything combined!

Now, we’re going to setup a few Spring MVC RestController to be able to login and logout.

Those controllers are shared by all the examples we’ll see below.

The PublicUsersController allows a user to login into the application:

The authentication is delegated to UserAuthenticationService implementation. UserCrudService is responsible of storing the user.

The SecuredUsersController is by definition permitting the user to perform operations only when logged in:

Here is the code:

Again, nothing difficult here! It’s time now to test the application. To do so, we need to create a Spring Boot bootstrap class.

The Application class placed in root package com.octoperf in maven module bootstrap is responsible for bootstrapping the application via Spring Boot:

We’re going to run this application like a simple Java main to launch the server. Finally, the server runs on port 8080 by default. As I already have a server running on this port on my machine. As a result, I configured Spring Boot to run on port 8081 via an application.yml located in bootstrap module too:

This module contains a UserAuthenticationService which is based on a simple random UUID.

The service logs in any user. I’ve said it, it’s pretty simple! You can plug here your own authentication logic instead of this dummy one. It’s up to you to adapt the code to your own needs.

The example-simple module is an example application which has the following configuration: 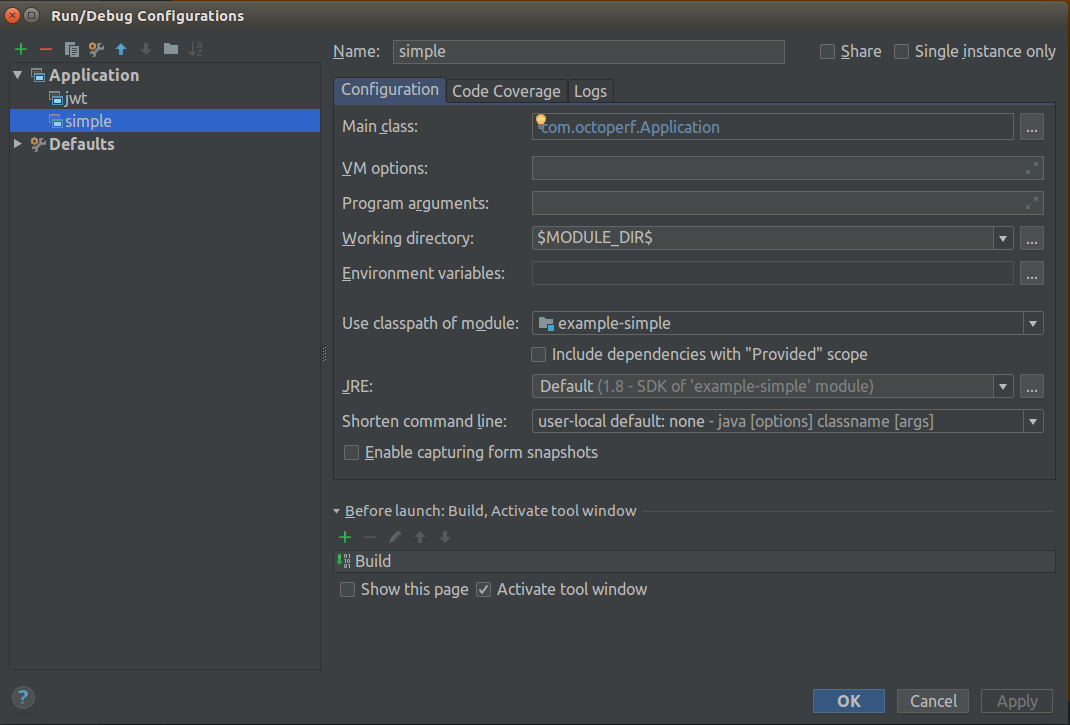 Create a launcher (within Intellij) with following configuration:

Then run it. The application should be running within a few seconds:

Great! The server is up and running, ready to be used. Let’s now perform some requests using curl.

Then we can also login with this username and password:

By sending an url-encoded form post request to the endpoint, it returns as expected a random UUID. Now, let’s use the UUID in a subsequent request to retrieve the current user:

Nice! We’re logged into the system and we could retrieve the current user in Json format. By default, Spring Boot uses Jackson Json API to serialize beans into Json.

Let’s now logout from the system:

If we try to get the current user again with the same authentication token, we should receive an error:

As expected, the server denied the access to the secured resource because the authentication token has been previously revoked.

What if you want to have a token that expires after some time (like 24h for example)? We can leverage JWT tokens for that. JWT Tokens are typically formatted as following:

The token is generated and signed by the server. It’s possible to decode it easily, but it’s not possible to generate a new one unless you know the server secret key. That very convenient!

How does it work:

The token service is responsible of generating and validating JWT tokens. Let’s see the implementation now.

I’m using jjwt library for that:

Nothing fancy here, i’m just using JJWT API as explained on their Github Page. Now, it’s time to use this TokenService in our authentication flow!

The user-auth-token module is responsible of authenticating a user with the TokenService. It contains the TokenAuthenticationService:

As you can see, when a user logs in, we return a token which contains the user username. We’ll use that later to find the user again when authenticating him.

The great thing is The entire token logic is encapsulated within the UserAuthenticationService.

The example-jwt module glues everything together:

Like previously, create an Intellij launcher with the following configuration:

Then run it. The application should be running within a few seconds:

Here we got a JWT Token now! Then we can also login with this username and password:

By sending an url-encoded form post request to the endpoint, it returns as expected a random UUID. Now, let’s use the UUID in a subsequent request to retrieve the current user:

Nice! We’re logged into the system and we could retrieve the current user in Json format. By default, Spring Boot uses Jackson Json API to serialize beans into Json.

Let’s now logout from the system:

If we try to get the current user again with the same authentication token, we should receive an error:

As expected, the server denied the access to the secured resource because the authentication token has been previously revoked.

I hope this ready to use skeleton security layer will enable you to build a secure Rest API using Spring Security. It took a while to figure out how Spring Security works, and how to create this configuration.

As you can see, the system is designed in a way it’s easy to replace the authentication logic with another.

We thought it would be a good idea to share this tutorial to help you avoid spending weeks messing around with Spring Security (as we did). 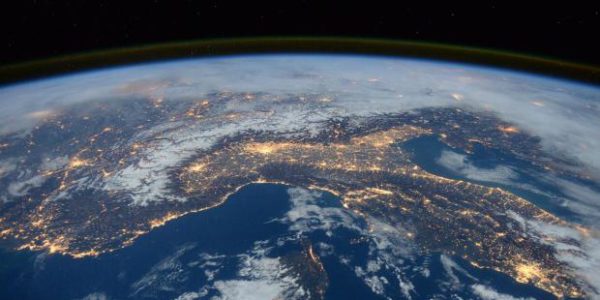