Wether you want to:

Assertions are the way to go.

The problem is: you don’t know how to get started. And the number of available assertions is overhelming. No worries!

This ultimate guide on JMeter Assertion explores every single assertion type through comprehensive examples. You’ll know when and how to use each kind of assertion wisely. Once you’ve read this guide, assertions won’t have any secrets for you anymore! Let’s go.

In this section, we cover the concepts which apply to all assertions. None of them depends on the type of assertion you are going to use. 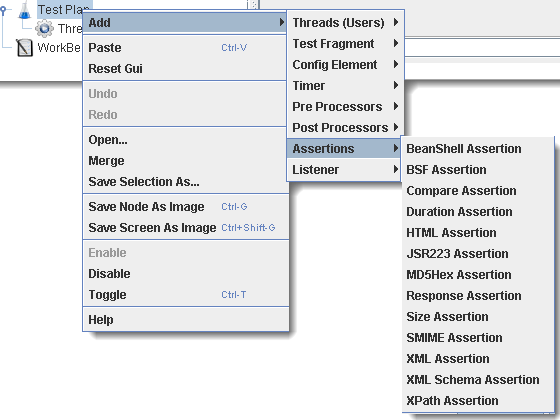 JMeter Assertions are a must have to perform additional checks on the result of a Sampler. Assertions are part of the Post-Processors elements family.

JMeter offers a wide variety of assertions which can be used in a number of different scenarios:

Which assertion should you use? It boils down to the kind of response you have to check.

Which scope should you use?

Assertion Scope defines to which sample results the assertion applies to:

In most situations, you will want to use the Main Sample Only option. Assertions can rarely be applied on both the main result and sub-results.

As we said before, Assertions are a special kind of Post-Processors.

Assertions apply to samplers defined at same level or below them. If none, it applies to the parent sampler only.

Let’s use some examples to understand the concept: 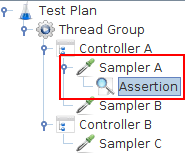 Assertion under Sampler A

Assertion after Controller A 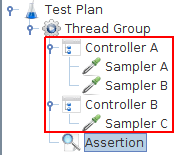 Assertion after Controller B

The best advice I can give is: Keep Things Simple and Stupid. Define assertions as child of samplers and avoid trying to be too smart. The easier it’s to understand the more maintainable the script will be.

Also, when an assertion fails, the failure is spread to the logic controller surrounding the sampler. That means failing assertions cause the associated controllers to fail too.

You must be aware that most assertions are CPU and memory hungry. The following table defines how much resources each type of assertion needs:

Each color has its own signification:

Optimizing Assertions usage is only a fraction of the things you can do to optimize JMeter for large scale tests. If you see the CPU / Memory usage go through the roof during a load test and have assertions, try disabling / removing those you don’t need.

Scripting assertions like the Beanshell or JSR223 assertions have variable performance: it really depends on what your script checks. Also, as these don’t have any scope UI setting, you must manually through scripting define on which sample results the script applies.

The best way to see if an assertion fails is to use the View Results Tree listener. Of course, there are many other ways to Analyze JMeter Results. 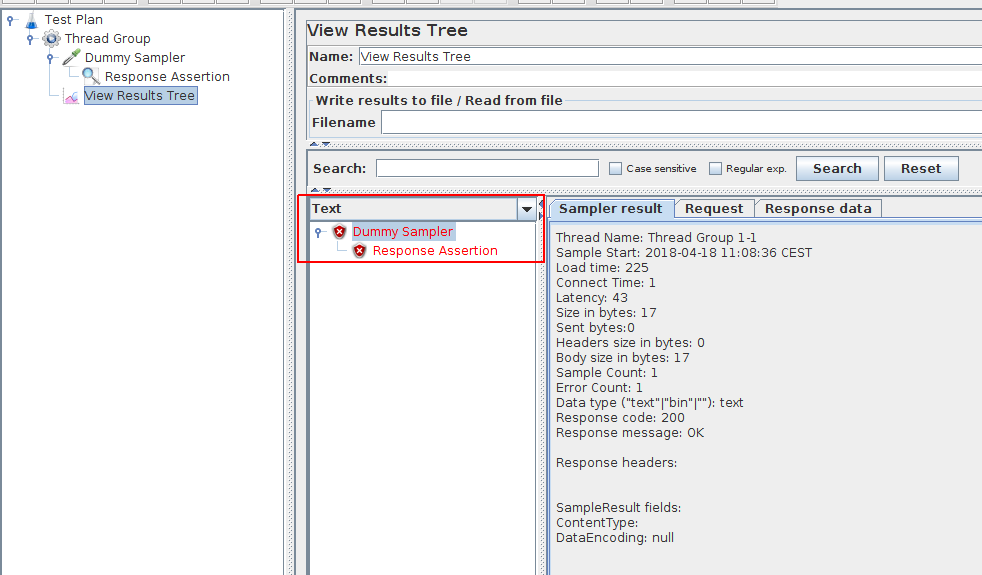 In this case, the response contained John Smith but the assertion checks it contains John Doe.

Let’s now see in greater details how each assertion works!

All the examples below are simulated using the Dummy Sampler. 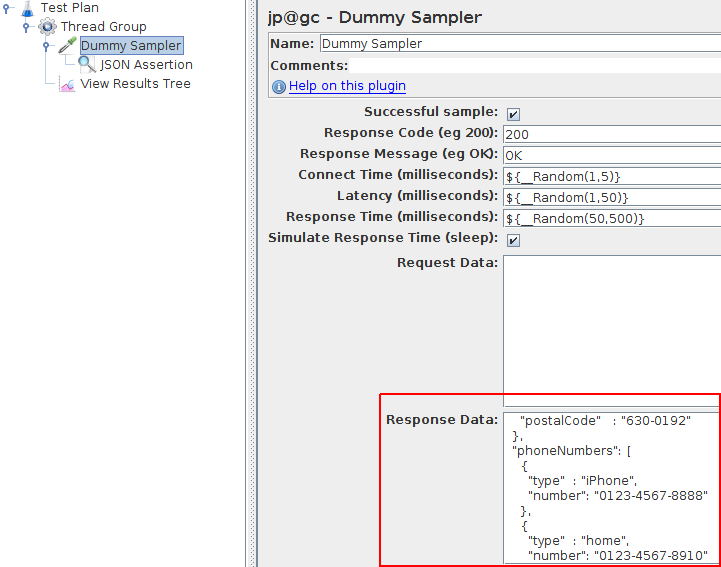 It makes it easy to try out various assertions without the need to setup a remote endpoint with the correct response. Try it yourself!

The following assertions are those which are used the most by Performance Engineers. Those assertions cover a wide range of use-cases. Knowing how to use them is the key to assert server responses properly. 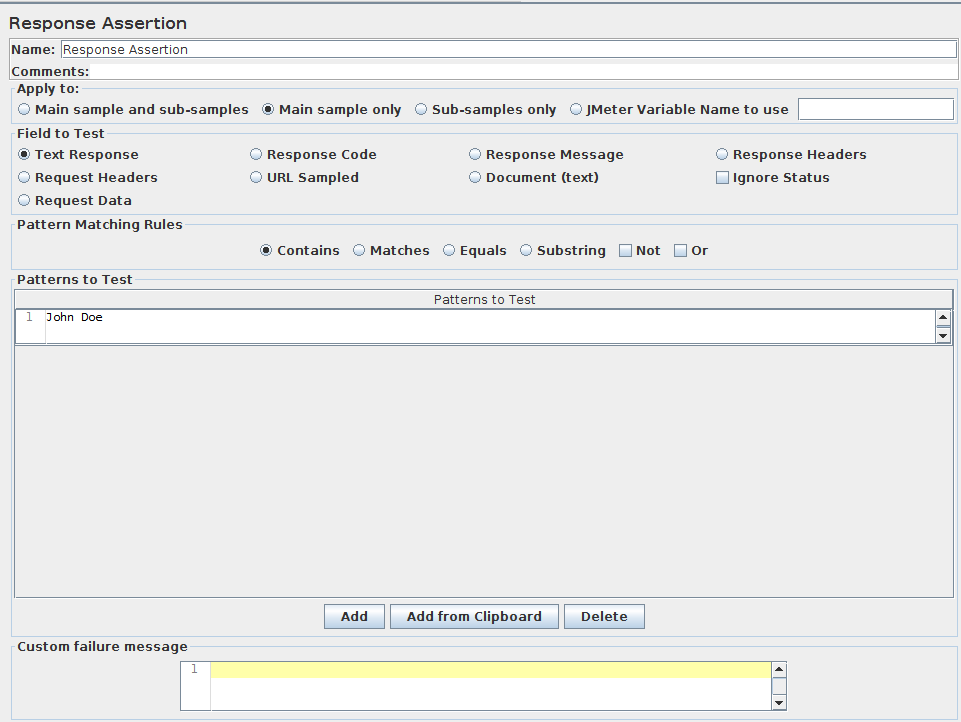 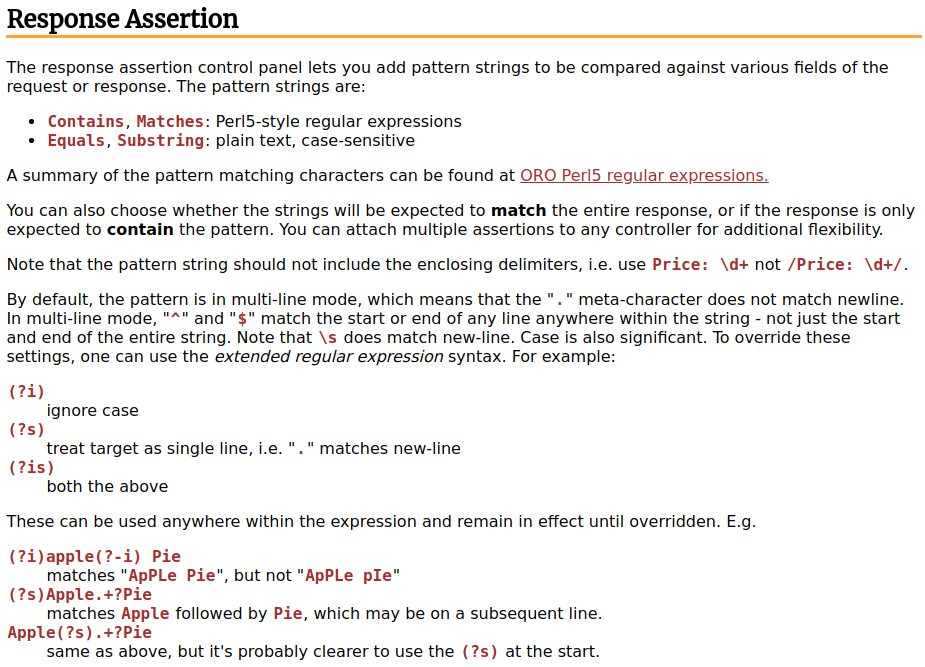 JMeter Response assertion is probably one of the most used JMeter assertion. It includes the following settings:

It’s the most commonly used assertion for several reasons:

Personally, the Contains Pattern Matching Rules fills 95% of my needs. I guess the other options can be useful as well, but mostly only in very narrow use-cases.

The ability to customize the error message is a plus, definitely. That way, you can have your own message in results like JTL files and get a better understanding of what’s wrong. Due to moderate cpu and memory footprint, this assertion can be used sparingly.

The Duration Assertion is especially useful to verify the application meets a certain level of performance. Typically, i’ll use it to check the server responds within a reasonable amount of time. The Duration in milliseconds field lets you enter the expected server response time.Any response time above that limit will trigger an assertion error.

It can be seen as a way to enforce SLA (Service Level Agreement). Therefore, it’s more of a performance alert than an assertion.

Here is an example error message when this assertion fails:

Due to Low cpu and memory footprint, this assertion can be used extensively.

The size assertion is pretty when you need to make sure the server response is always of a certain size: 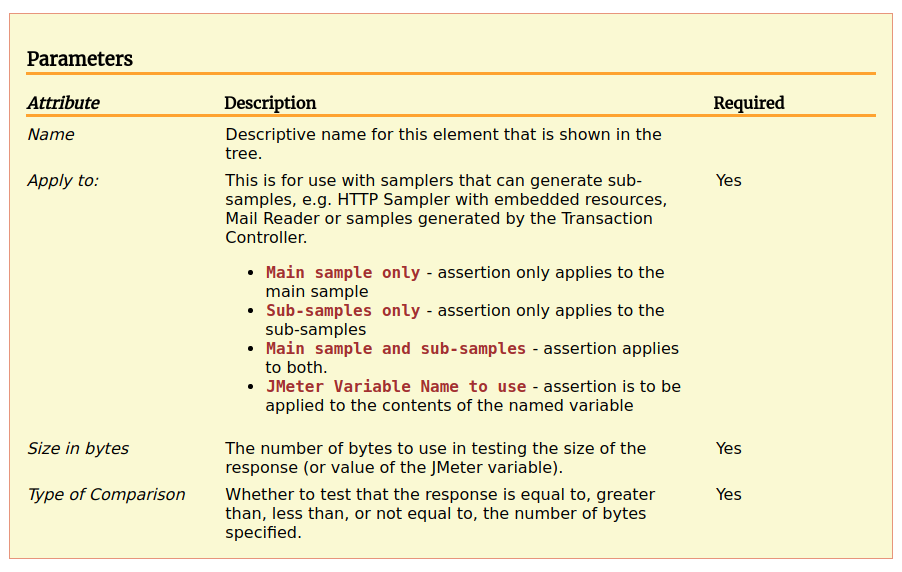 It’s very simple to use. I personally use it to check the size of downloaded files like videos or music. I like to be sure the file has been fully downloaded by JMeter.

In case of failure, you should see both the expected and the real response size in bytes:

Due to Low cpu and memory footprint, this assertion should be used extensively.

Suppose we want to check that the first phoneNumbers type is iPhone. We would use the $.phoneNumbers[:1].type JsonPath Expression.

We would then configure it as following in JMeter:

Now suppose we put Samsung Galaxy in Expected Value instead.

As expected, the assertion fails because the phoneNumbers first type is iPhone.

For more information about how to use JsonPath, refer to our article on JMeter Json Path Extractor. It goes into much greater details about the subject.

This assertion has a High cpu and memory footprint because it parses Json responses and converts them into an object representation. 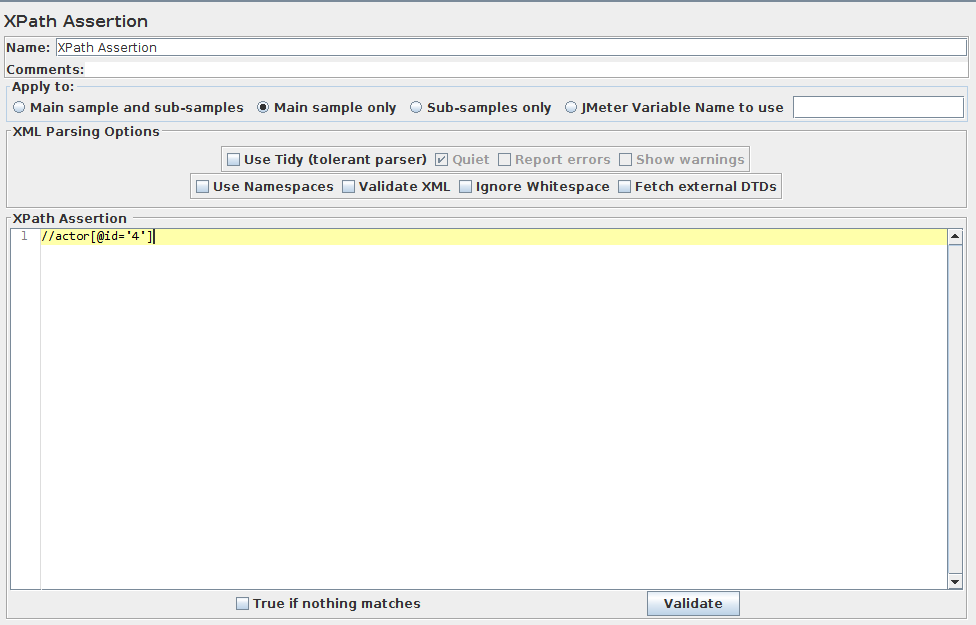 XPath is a query language for selecting nodes from an XML document. What can we do with that? It’s the equivalent of JsonPath but for XML responses. Take a look at our excellent XPath Extractor Guide if you want to learn how XPath works.

This assertion is mostly suitable for SOAP Web Services. 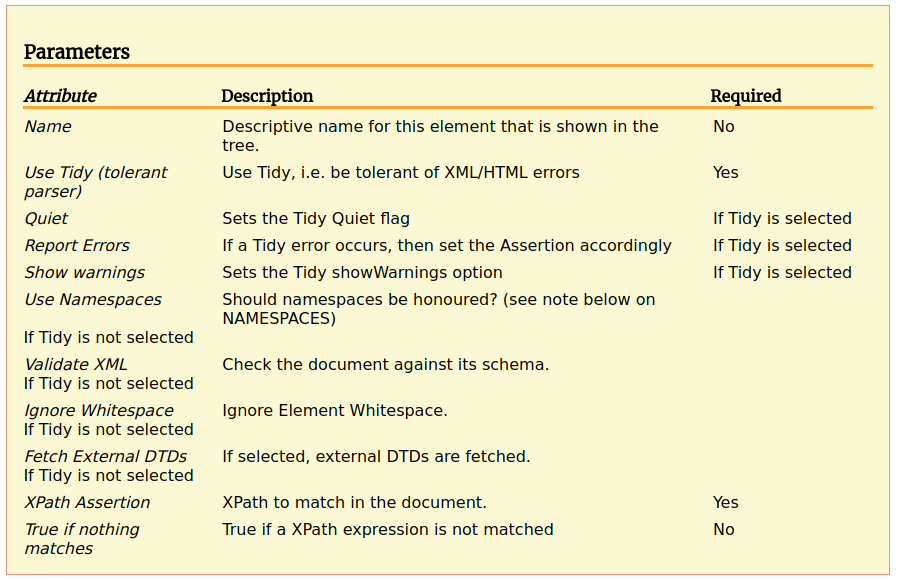 Most of the time, you can leave those settings as is (all unchecked). Unless the XML to assert is invalid, the default parser is just fine.

Now let’s configure the XPath assertion with XPath Assertion: //actor[@id='4']. This expression is known to fail because there is no actor with id=4.

Running the assertion should fail with the following message:

This assertion has a High cpu and memory usage (especially with big XML responses) because it parses XML responses and converts them to an object representation. Avoid using it during load tests. 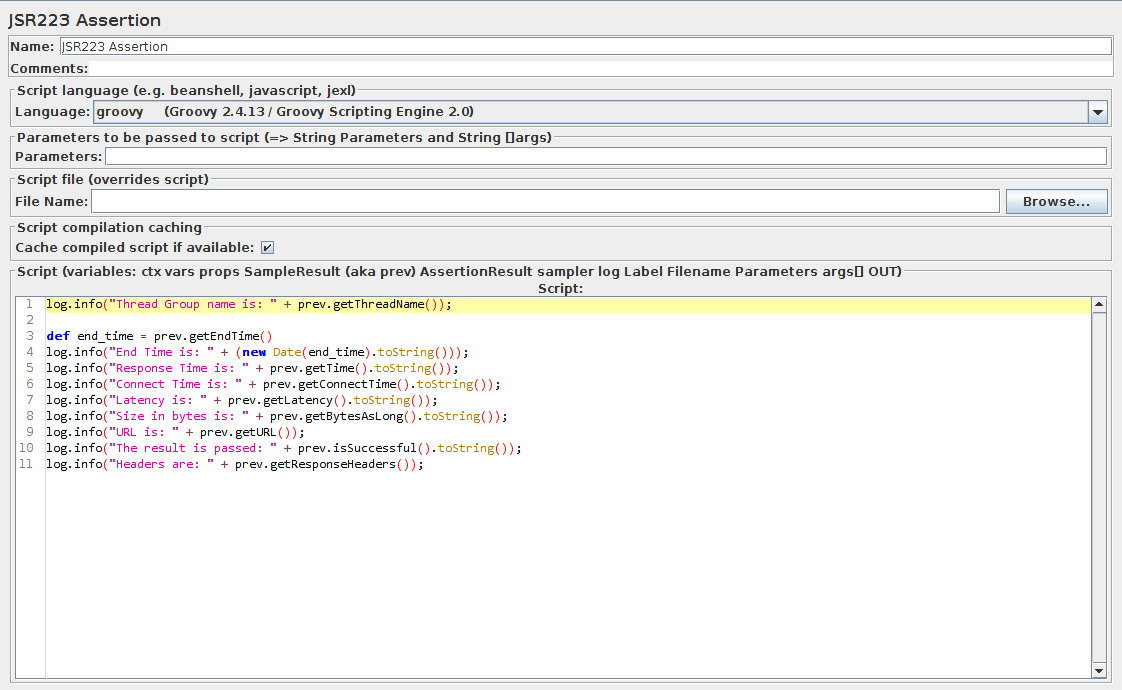 The JSR223 Assertion is the successor to the BeanShell Assertion. It provides much more flexibility on the scripting language (it supports beanshell, groovy, java, jexl and Javascript) and is way faster than beanshell. (at the condition to use groovy) 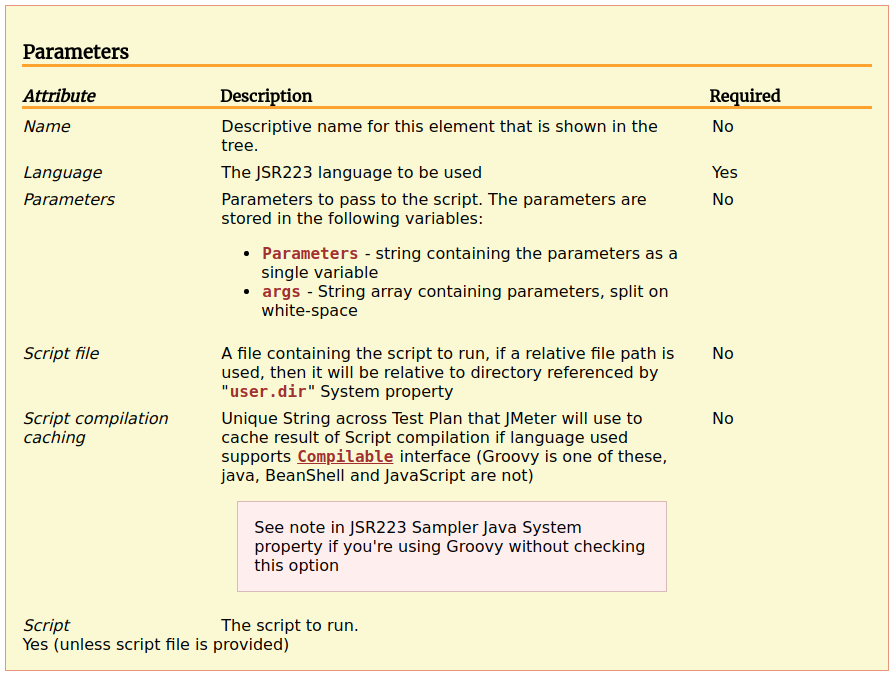 In most of the cases, you’ll leave the extra settings (like Parameters and Script File) alone. These are mostly used when you need to share scripting functions accross multiple JMX projects. In this case, you need to share the scripts, thus make them reusable by putting the common script in a separate file.

For example, if we want to check the previous result response time with a JSR223 script, we would do the following:

Of course, it will fail because we want a response time of 0ms.

This assertion has a Variable, which means the CPU and memory usage varies depending on the logic implemented inside the script. Generally speaking, avoid heavy computation in assertions.

The XML assertion is great to check if the response is a valid XML document. But, that’s the only use-case of this assertion. It can be useful in functional testing when you need to check the server response is well-formed.

In case of error (like invalid XML response), you should see an error message like the following:

Due to High cpu and memory footprint, this assertion should be avoided during load tests.

This assertion allows to check an XML response is conform to a certain [XML Schema DTD](Document Type Definitions). I guess the usage is anecdotical, I’ve personally never used it.

It may be suited best for SOAP Web Services where responses must follow a strict schema.

Due to High cpu and memory footprint, it’s suitable for functional testing but not load testing. 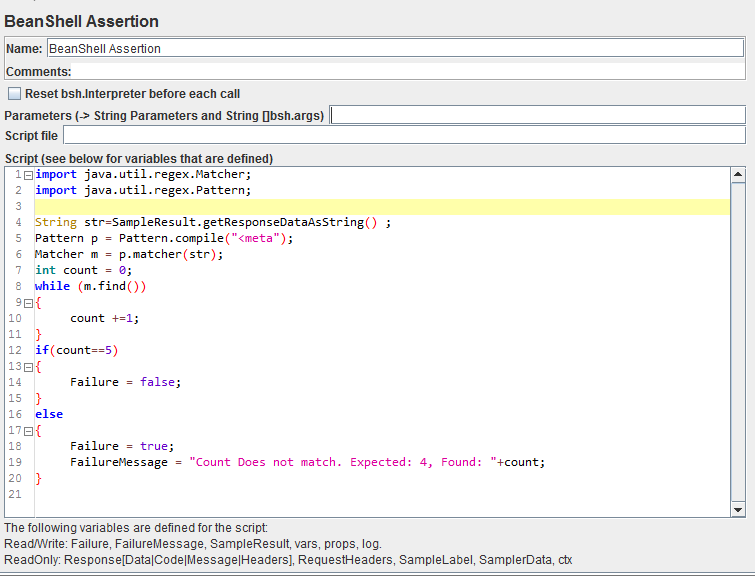 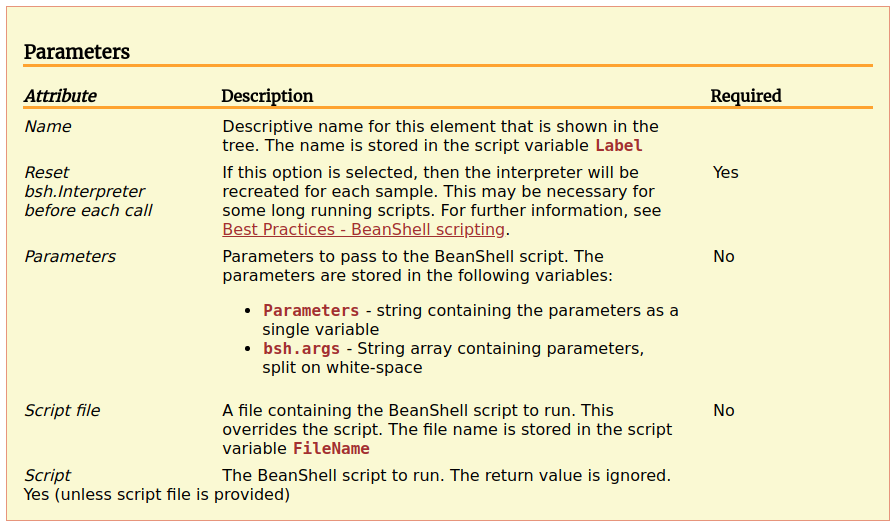 You can for example use the following script: (very similar to Java)

And the result should be the error message configured.

It’s not straight forward to use as you need to learn the scripting language (which is very similar to Java). But, it’s much more customizable than any other assertion.

A variety of variables are available directly into the script:

Due to High cpu and memory footprint, prefer the JSR223 Assertion. It’s very similar but much faster to execute.

Performs an MD5 hash of the server response and compares it against the given Md5 hash. It perfectly fits the case you want to check a downloaded file is intact.

It has only one setting:

The MD5 algorithm is a widely used hash function producing a 128-bit hash value. Although MD5 was initially designed to be used as a cryptographic hash function, it has been found to suffer from extensive vulnerabilities.

Let’s try to run it against our dummy sampler with a random md5 hash provided.

As expected, the assertion fails because the MD5 hashes are different.

As the server response must be exactly the same on every check, it’s only suitable for static resources check. Any dynamic web page will probably yield an assertion error because the content is different.

Due to Moderate cpu usage, it can be used to check file integrity during small load tests.

This assertion checks the HTML response is a well-formed HTML document. The strictness level can be configured by setting Error Threshold and Warning Threshold to upper levels (other than 0). It’s mostly well suited for functional testing.

Obviously, You don’t want to check HTML response validity when throwing thousands of hits per second on your servers.

It can be configured with the following settings:

Here is an example JTidy report:

Due to High cpu and memory usage, avoid using HTML assertions during load tests. It parses HTML responses which consumes a lot of resources.

While assertions provide a convenient way to validate server responses are as expected, you should be aware it has a cost. Most fancy assertions like JSON or XPath assertions should only be used in light load test (a few concurrent users), or in functional tests (usually one single user).

When used wisely, scripting assertions like Beanshell or JSR223 can solve problems other assertions won’t even touch. But, again beware of the performance drawback: scripts should do as little computation as possible.

Load Testing is a discipline which requires a strong attention to performance. Make sure to read our guide explaining how to optimize JMeter for large scale to avoid common JMeter pitfalls. 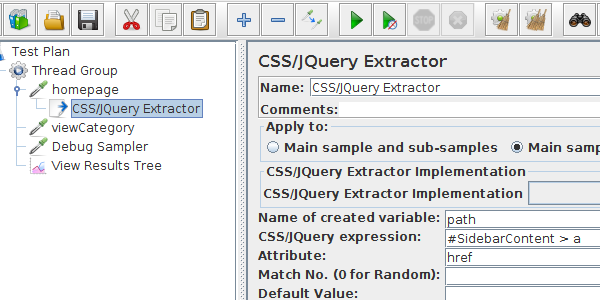 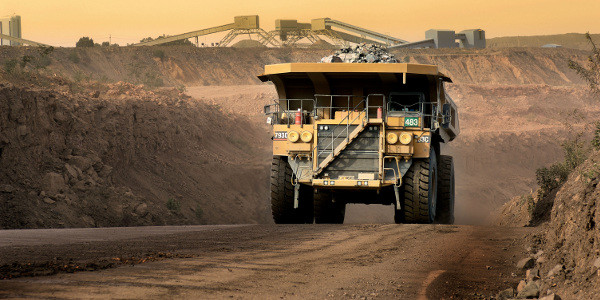 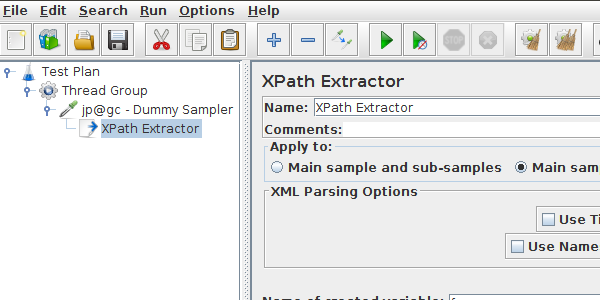