Finally a guide to learn you how to get the most out of your Acer Predator Helios 500 Laptop! I’ve spent a lot of time figuring out all the tweaks described below.

And the good news is: all those tweaks are suitable for other laptops too! 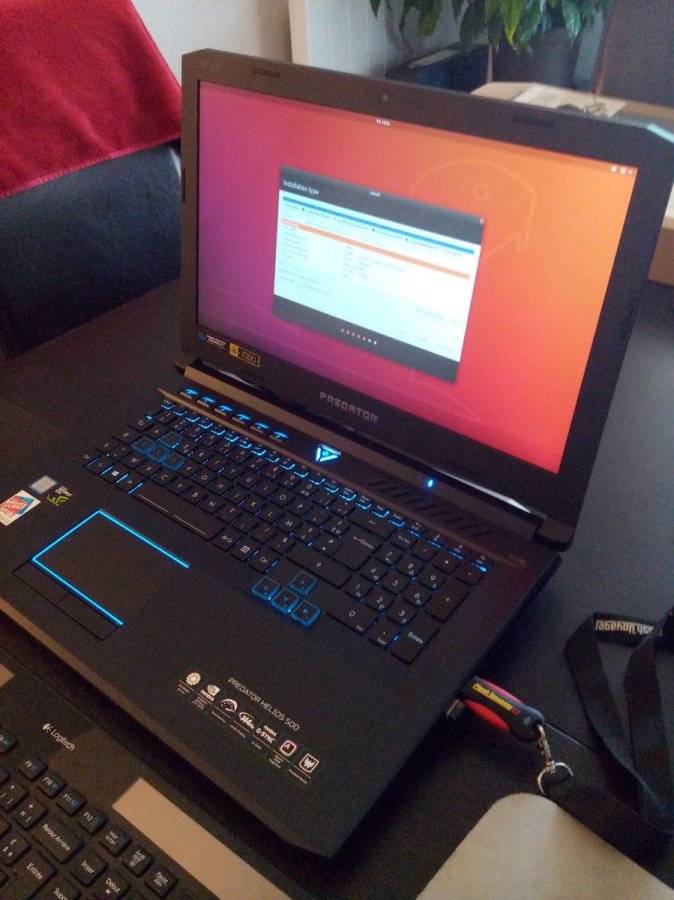 Because it’s staying cool! I use mainly my computer to:

I wanted a laptop with the following specs:

Having an Acer V3-772G which is quite loud (fan always running with a pretty weird noise), I wanted a laptop capable of running my daily tasks while emitting as little noise as possible. I’ve considered:

That’s when I found about the Acer Predator Helios 500. The review on notebookcheck was pretty solid:

That being said, this machine has some drawbacks:

Let’s dive now into details you won’t find in other regular reviews about the Helio 500: how to get the last bit of performance out of it!

The Intel 8750h delivers more than enough power for most workloads. See 8750H vs 8950HK for more information.

Given the 8950HK has a higher TDP (Thermal Design Power), it’s more subject to overheating and thermal throttling. Real-world performance are more than likely to be on par with the 8750H (except in rare cases).

I’d rather invest into adding 32GB RAM rather than having a slightly faster CPU. But that’s just a personal choice.

Here are the Hardware components I found in my Helios 500:

Only RAM, HDD and SSD can be replaced. All other components are directly soldered on the motherboard.

Out of the box, you won’t be able to install Ubuntu 18.04LTS because by default:

How to switch to AHCI

Switching off secure boot is a little more tricky since it must be done in 2 steps.

How to disable Secure Boot

Once both options changed, you can boot on a USB stick prepared with an Ubuntu image and proceed to the installation.

As the bios is configured in UEFI mode by default, it’s best to configure Ubuntu using an EFI Boot partition.

I would strongly suggest to remove any swap partition and this may cause the SSD to wear-out prematurely, without providing any performance advantage.

Once you have installed Ubuntu 18.04LTS on the Helios 500, you will quickly notice:

Let’s see how to solve all those issues.

I found the answer after several hours of research.

You must install iwlwifi backports:

Also, after each Kernel upgrade, you must install them again (pretty annoying):

And reboot once finished. That’s it! Your wifi card should now be detected properly by Ubuntu.

Via Software and Updates, choose the Additional Drivers tab and select Nvidia Corporation drivers (proprietary ones). The GTX 1070 works perfectly fine with those.

You can then adjust backlight with commands like xbacklight -10 (minus 10 percent). Sadly, I don’t really know why the backlight adjustment doesn’t work out of the box.

Anyway, that’s not really a problem since i’m not using the 17.3 inches monitor most of the time, but my external Acer B326HUL 32 inches monitor.

The built-in audio driver doesn’t detect the headphone jack connection properly. You must use hda-jack-retask to indicate to Ubuntu your jack is disconnected.

Once done, Ubuntu will use the laptop speakers instead. I finally opted for an external sound card based on the cheap CM108 Audio Controller. You can find one on AliExpress for about 3$ shipping included.

In order to keep an eye on CPU temperature, you can install both lm-sensors and psensors:

With those, you can have the CPU temperature right within the Gnome toolbar.

Let’s see now how we can maximize the performance of this beast!

The question you may ask is: Why undervolt the CPU?

How does this affect CPU performance? To understand this, we must understand how Intel Turbo Boost works. By default, the Intel 8750h has 2 power limits on the Helios 500:

By lowering the voltage, you can increase the frequency of the CPU to reach the same Power Limit. The difference is: the CPU runs faster! By undervolting the CPU, we are in fact allowing the Intel Turbo Boost system to run the CPU at a higher frequency for the same heat dissipated.

On laptops which overheat, this may reduce the CPU temperature. On the Helios 500, I found it didn’t improve temperatures (which are already great), but significantly increased the CPU speed.

I would suggest to use ThrottleStop. Most users report that it’s more stable than Intel XTU. And you can save your settings and apply them on startup too.

undervolt is a program for undervolting Intel CPUs under Linux. It works in a similar manner to the Windows program ThrottleStop (i.e, MSR 0x150). You can apply a fixed voltage offset to one of 5 voltage planes, and override your systems temperature target (CPU will throttle when this temperature is reached).

I could reach -200mV on both core and cache tested stable with Prime95. (which runs on Linux too)

That’s a pretty good results. Most 8750h can reach -120mV to -150mV without affecting system stability. How low you can go is a lottery: it depends on your CPU.

Once you’ve found your CPU is not stable (prime95 is crashing or throwing an error), step back the undervolt by a safe 10% margin. In my case, I was able to go down to -220mV until crashed appeared. I stepped back to -200mV.

On my old Intel 4702MQ I could only reach -100mV undervolt. Keep in mind this highly depends on the quality of your CPU.

As the CPU runs around 45°C on idle and 70°C on full load, I don’t see any good reason to repaste it.

I’ve previously repasted an Acer V3-772G which was reaching 90°C on full load. Once repasted with a good thermal paste, it was hovering the same temperatures as the Helios 500 (but with a much worse CPU cooling system).

It should only provide a marginal improvement (and maybe no improvement at all) on the Helios 500.

There is an excellent Youtube Tutorial explaining how to disassemble the Helios 500.

Disassembly is pretty easy and give you full access to:

How to Disassemble Acer Helios 500

I found the process really easy. Once used to it, you can disassemble the bottom panel in 10 minutes.

Disassembly is very useful to:

Let’s see what’s bios modding and the benefits you can achieve. 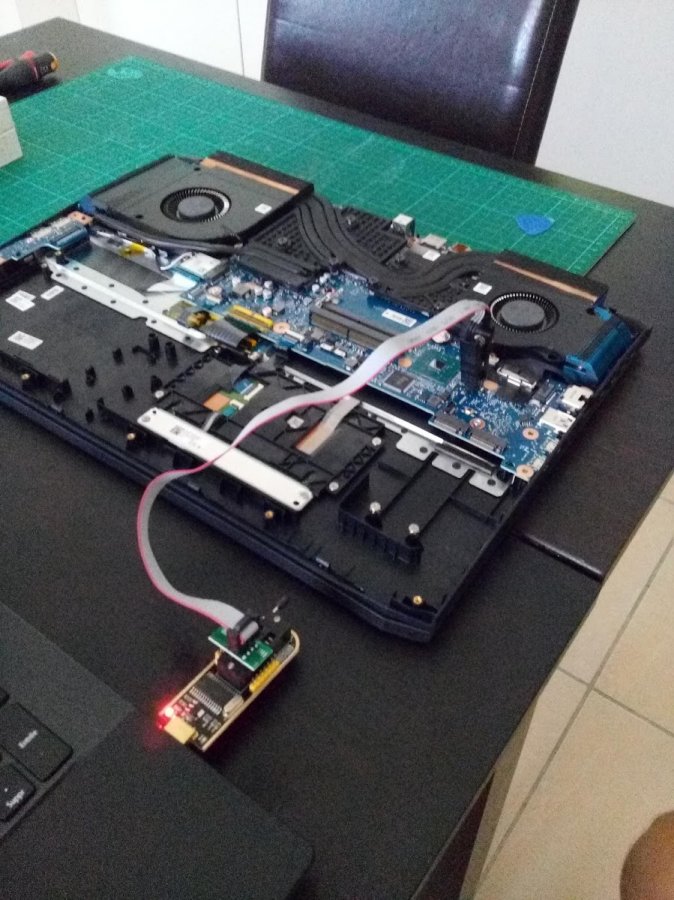 Kind of scary to do those things on a brand new 2K€ laptop!

Most laptop bioses are restrained by default. That’s completely understandable: most users won’t mess with the bios either. But, for power users like me, it’s a bit frustrating.

I have modded my Helios 500 bios. The goal is to unlock hidden bios settings like:

So, is it really useful? Not as nearly as undervolting. But it still provides a lot of new options like shown on an Helios 300 unlocked bios.

I have modded my bios using:

And believe me or not, i’ve overwritten my bios a dozen of times already! That what happens when you play with bios settings you don’t understand.

Where is the Bios Chip

InsydeH2O v5 bios installed on the Helios 500 is write protected: it means you need an external hardware programmer to dump and overwrite the bios.

But firts, let’s locate the Bios Chip on the Helios 500. 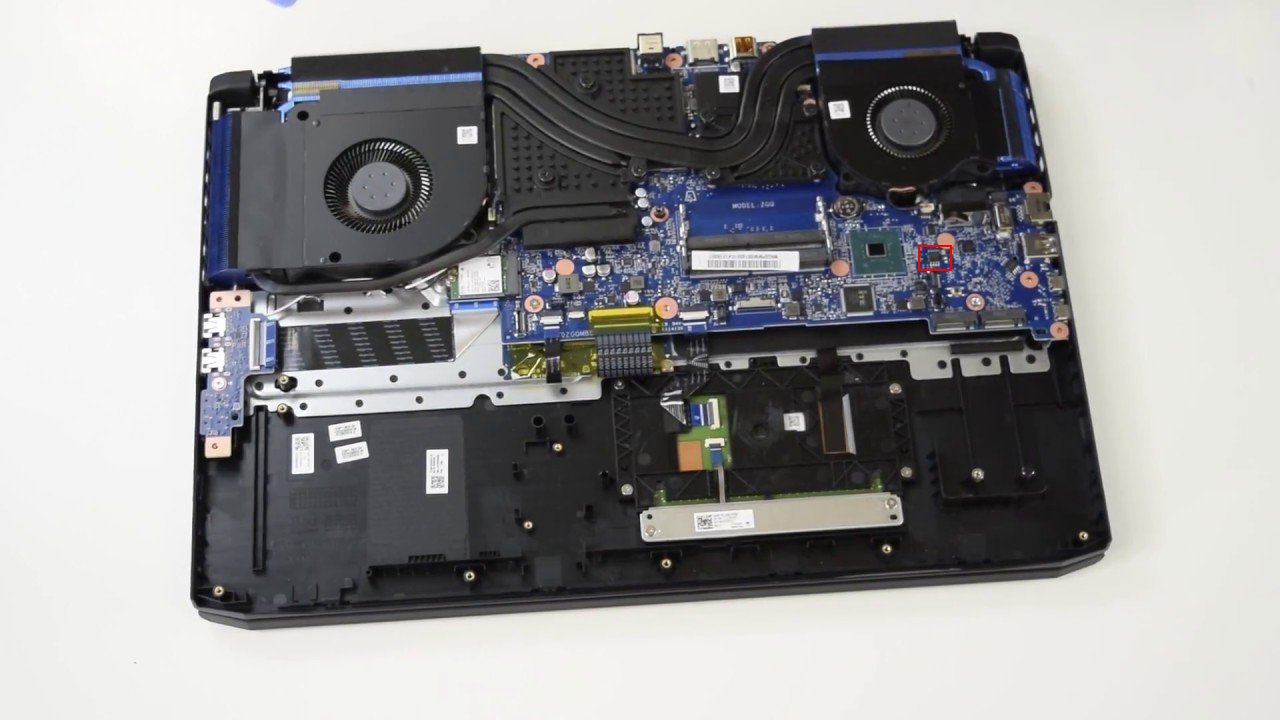 The bios firmware is unique to your computer. You can’t use a modded bios from another Helios 500 on your own.

The greatest thing is yet to come: you can reprogram your bios chip even when it’s soldered on your mainboard! No need to desolder or replace the chip.

The bios chip is a CMedia GD25Q128D. I’ve only found specs for GD25Q128C so I assumed this chip would be almost the same.

Then, we need a CH341A USB programmer. 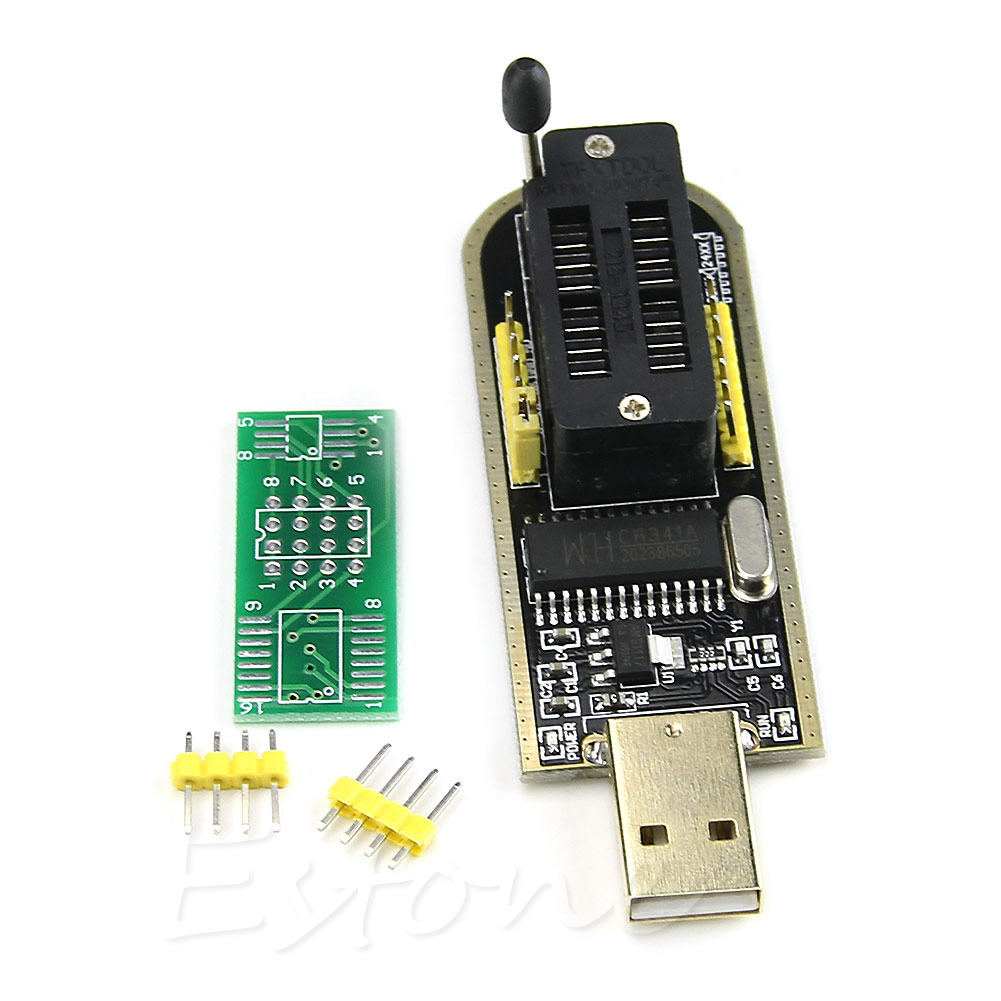 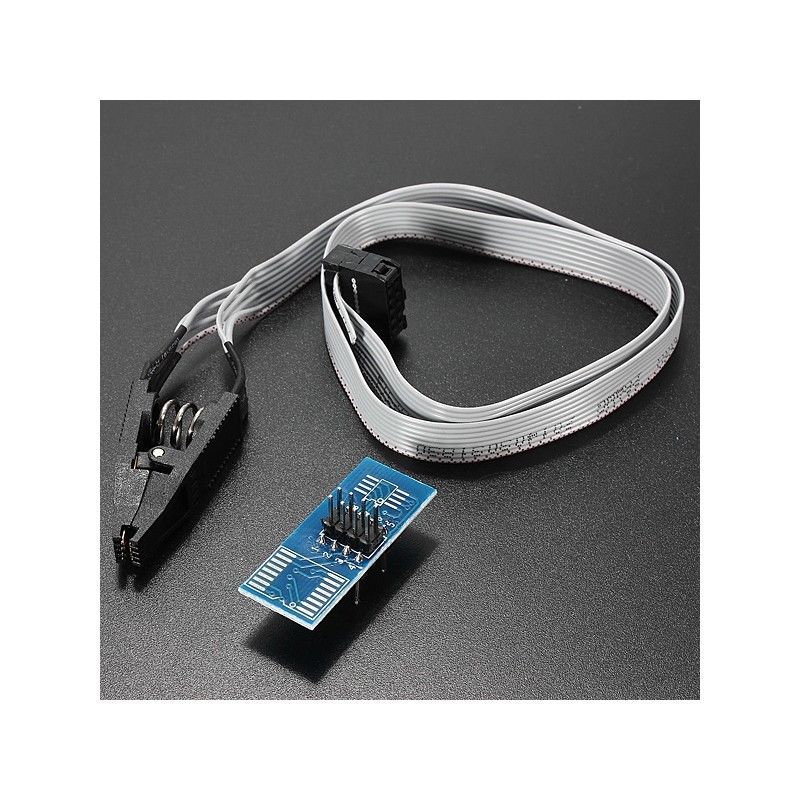 Great, now we have the material to first dump the existing bios.

Now that we have a dump of the existing bios, let’s head to Bios Mods forum and ask for a bios mod. You will have to provide a downloadable binary of your existing bios.

Someone should mod your bios within a few hours and send it to you by private message. It’s not time to overwrite the bios

That should overwrite your existing bios with the binary bios you provided (the modded one). That’s it!

Carefully Reassemble the laptop and boot it. Hit F2 to enter the bios.

Some weird things you may experience:

Usually, when you enter wrong bios settings and the computer won’t boot, you just make a clear cmos to restore bios default settings. That doesn’t seem to work on the Helios 500.

Everytime I have entered wrong bios settings (like trying to enable the Intel GPU), I had to overwrite the bios with the modded one again. It’s pretty annoying and time consuming, so don’t touch bios settings unless you know what you do.

The settings I mostly use are the following: 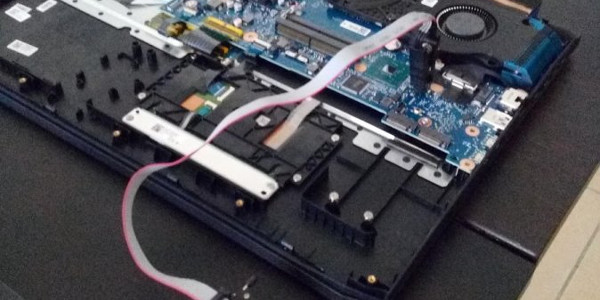 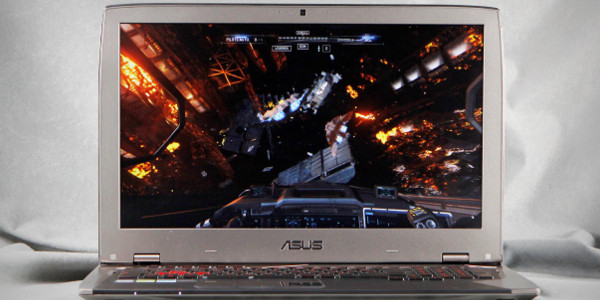 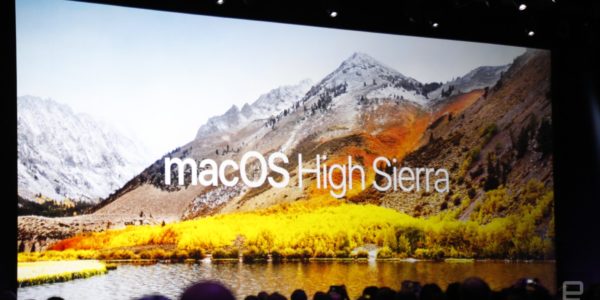