It has been a few months since the last update post and as you will see we have been quite busy. Let’s not waste any time and look first into the most obvious change of them all.

Some of you may have already noticed that we updated our logo last week. A simpler text logo like we had before did not feel fitting anymore. The new Octo-rocket logo will take our favorite octopus higher than never before. To make good on this promise we have also released a lot of new features!

The long-awaited report templating feature will allow you to make your own custom report templates and apply them to a test before/after runtime. The way it works is that you configure a test report with the correct layout and then go to the new Templates menu to create a template from it: 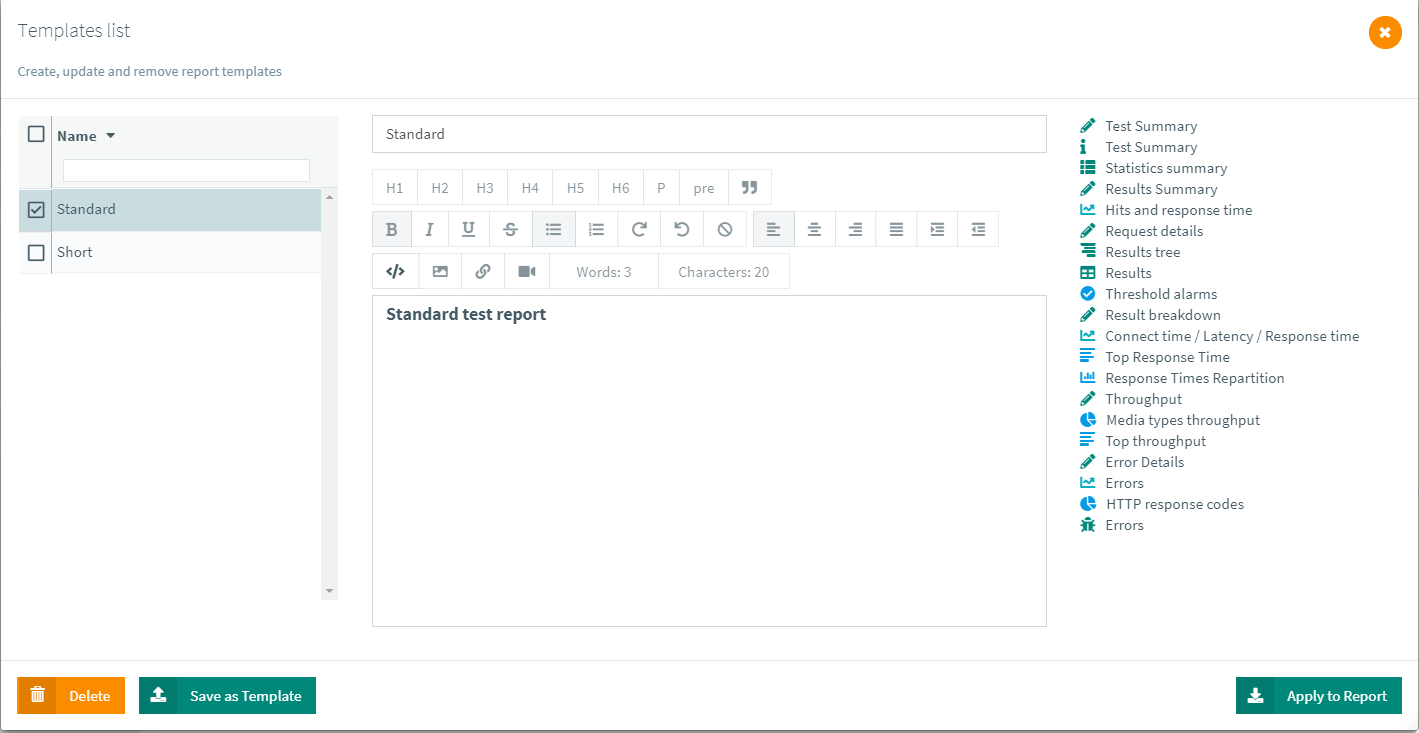 You can now apply this template to any existing report or just select it before the test even starts:

With this, it’s never been easier to customize your report exactly as you want.

Another feedback we have had a lot was about controlling the load while the test runs. Previously you could only define the load before the test so once you launched it, you could only stop the entire test. Which is why we’ve added remote control of JMeter properties.

This can be done by first defining a hits/minute throughput per user as a variable named like this:

Combined with the following property:

With this you can edit the max number of hits/minute allowed for each user live during the test:

Looking at the final result for this test we can see that the hit rate definitely followed our instructions:

Of course this could be used for many other purposes like sharing a value between several virtual users and editing it as the test goes. We are working on a tutorial on how to do this and will release it later on this blog.

Another addition we made earlier in january is the before and after test scripts. Since we create/destroy the load generator docker containers for the test it was impossible to retrieve information from them after the test. An example could be to generate a csv file containing data for another test. We have scripts examples on how to do just that in your virtual user but storing it afterward was previously difficult if at all possible.

Now you could use a script like this one:

Just name it after-test.sh and save it in the Files menu of your project. It will save the CSV file from each load generator and you can retrieve them from the Test logs menu of your report.

We added a header integration with Instana so you can get additional info in there during your tests. Just activate it on the runtime mmenu:

This will add two headers x-octoperf-testName and x-octoperf to every request we send during the test.

Our monitoring agent can now interface with your New Relic account to get APM metrics from there and include them in our report. The configuration is described in our documentation. This way you can plot any metric gathered by new relic along with response times and other monitoring metrics.

I hope you are as excited as we are for this new year. We have already come far with OctoPerf and we still have a lot of ideas in mind to make it even better. As usual you can give a try to all the new features even from your free account and let us know your feedback!