Gatling is a load testing tool for measuring the performance of web applications. As such, it supports the following protocols:

Other protocols are also supported either by Gatling itself (like JMS) or by community plugins.

Gatling load testing scenarios are defined in code, more specifically using a specific DSL. This guide focuses on the basics of writing a simulation to test an HTTP application: OctoPerf’s sample PetStore.

The first thing you need for this tutorial is to be comfortable with HTTP. I strongly recommend you to read the Mozilla overview of HTTP.

There are a few points to remember for this guide. HTTP (Hypertext Transfer Protocol) is a client–server protocol. The client (usually a web browser) sends a request to the server. This request is sent at a URL (Uniform Resource Locators) that identifies the resource required. The server then replies with a response.

Gatling and other protocol-level load testing tools (JMeter, The Grinder) only simulate these low-level interactions. They emulate the behavior of web browsers while sending requests and fetching the server responses (all the while measuring performance metrics) but do not simulate user interactions on the UI.

This is particularly important to keep in mind when developing and load testing web applications that heavily rely on JavaScript such as Single Page applications (Angular, React, Vue, …) as performance issues may come from both the server and the javascript client execution.

Let’s get back to HTTP! When you open a web browser at https://petstore.octoperf.com:443/actions/Catalog.action?params1=value1&param2=value#anchor, the URL is composed of:

Gatling manages the scheme, hostname and port on the HTTP protocol configuration. The path and query parameters are handled at the request level.

HTTP Headers are sent along with this URL. They let the client and the server pass additional information. An HTTP header consists of a name (case-insensitive) followed by a colon (:) and a value. Gatling handles headers both globally in the HTTP protocol configuration or for a specific request.

The server replies with a response. It has a body and HTTP headers. For our sample URL the body is the HTML content of the page.

Open your Web browser console (F12 in Chrome) and the Network tab to have a view of these information: 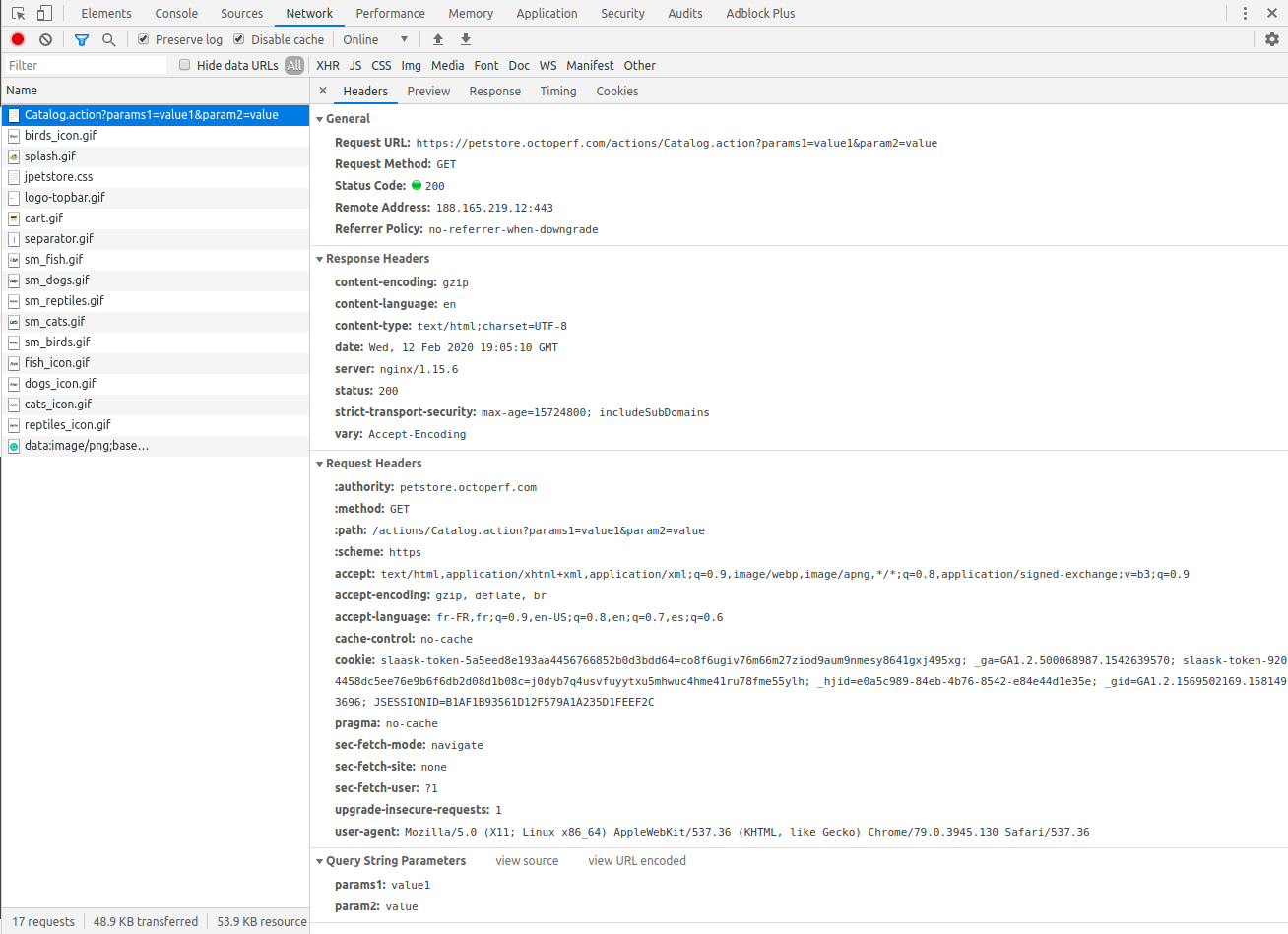 The second thing you need for this tutorial is to either:

Why Kraken? Kraken is a load testing IDE that provides a complete development environment to load testers that seek to make the most out of Gatling:

We will soon dive into a single URL script and how to run our first test with it. That is a perfectly valid way to test a simple API. But whenever you wonder about the performance of an entire application, it is better to simulate the behavior of real users. That means recording/replaying a user journey through the application. We will cover both aspects in this tutorial and the next ones. Whether you test a REST API or an entire application doesn’t matter much since you will be using similar mechanisms in both situations. For instance, they require the same level of parameterization as you often need to extract values from a server response to inject it in subsequent requests. The virtual users you create in Gatling are called scenarios.

Concretely a scenario is a list of request definitions interleaved with pauses (think times), conditions and loops. Several scenarios may be used simultaneously during a load test. For example with an e-commerce website, most visitors are probably simply browsing the store while a few are actually adding items to their shopping cart and going to the checkout page.

The other important aspect of load testing is configuring the number of concurrent users that visit the application under test. Typically, you want to specify how many users are expected, for how long, and the frequency of their arrival. The setup of this user load policy is done in Gatling using Injection Profiles.

Gatling’s Simulation scripts gather all these information in a single file, using code written in a dedicated language.

The Simulation is a Class. Behind the code there is an object than contains all required properties for your load tests:

You do not need to know how to code using an Object oriented programing language such as Scala to write Gatling load testing simulations. Basic scripting competences are more than enough.

You will find a folder named user-files in the installation directory of Gatling. It contains two sub-folders:

Creating a Simulation in Kraken

The default file embedded in Kraken already include the Simulation files for this tutorial. You can simply open them from the Simulation tree. It’s still good to know how to create new scripts though.

In Kraken, dedicated file trees for simulations and resources give you quick access to these files: 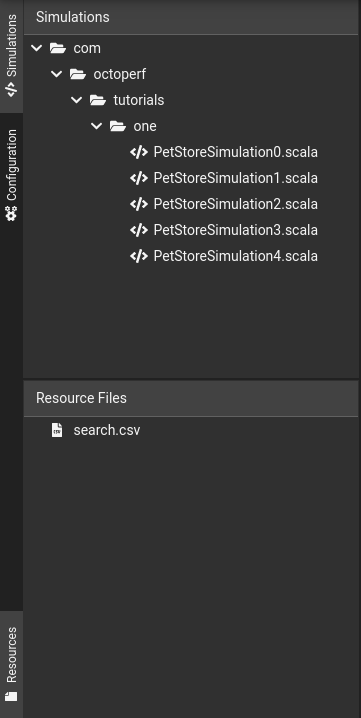 They behave like any file system explorer. To create a new simulation:

The file is automatically opened in the center pane.

Use code snippets to quickly create the file content:

You can add the default imports in the same way with the imps code snippet:

As well as generate the simulation class with the class snippet:

The PetStore is a sample e-commerce Web Application. We are going to write a Gatling simulation script to load test it with a simple GET request. That’s just a start, next steps are coming!

You can download this sample scala file and copy it in the com/octoperf/tutorials/one folder to get started quickly.

Before writing a request, we need to configure the HTTP protocol. In Gatling, this is done with the http keyword. The simplest HTTP protocol configuration only sets the baseUrl property:

Here we declare a variable (val) named httpProtocol and affect the created HTTP configuration to it (= http.baseUrl()).

By default, Gatling seeks to simulate web browsers in the most realistic way possible. You can change this behavior with various configuration options (that should be appended after the baseUrl() statement):

Much more configurations are manageable at the protocol level: Gatling Documentation.

This protocol configuration will be used when setting up the injection policy.

A First GET Request

In the meantime, let’s start simple with a GET request to simulate a visitor that would open the homepage of the PetStore. Here is the sample code:

Split point by point, it goes:

We saw previously how to add headers on the protocol level. You can also add headers for a specific request: http("request_0").get("/actions/Catalog.action").headers(Map("accept" -> "text/css,*/*;q=0.1")).

If you want to re-use the same set of headers for multiple requests, simply declare a variable: val myHeaders = Map("accept" -> "text/css,*/*;q=0.1") and use it in your requests: .headers(myHeaders).

Gatling has two kinds of user load models, each with a set of dedicated DSL keywords:

Use the .inject() keyword to tell Gatling to inject users for a specific scenario. For instance, to configure the execution of a single iteration of one virtual user, you would write:

The number of concurrent users depends on the duration of the execution of the scn scenario.

What if you want to ensure a fixed number of concurrent users? Then simply use closed injection rules. For example:

To understand the difference between the closed and open models, you must think in term of iterations. As previously explained, a scenario (aka virtual user) is a sequence of HTTP requests. The execution of one sequence is called an iteration of the virtual user.
Using an open model, nothing happens when an iteration completes. To simplify, a new iteration starts when one completes in a closed model.

Use this sample scala file or open com.octoperf.tutorials.one.PetStoreSimulation1.scala in Kraken for a completed Gatling simulation script that summarize what we have seen until now.

It’s time for some action! On Linux, run the Gatling simulation with the command:

Using Kraken, debugging a simulation allows you to see what request is sent and what response is received from the server. To debug a simulation in Kraken, simply open the simulation file and click on the Debug icon in the upper right corner of the file editor.

Warning: Be careful with the injection policy when debugging on Kraken. Always set it to atOnceUsers(1) or you might record too many requests/responses and crash the application.

HTTP is a client-server protocol that allows the fetching of resources, such as HTML documents. Usually the client is a Web browser that reconstructs a complete document from the different sub-documents fetched, for instance text (.html), layout description (.css), images (.gif), etc. When the debug of the Gatling has completed, you can see that only the request to the HTML page is executed:

In the debug view of Kraken you can see the different parts of the HTTP request (URL, Headers) and of the response (Code, headers and body).

Compared to what we see in the Chrome console, this is far from perfect:

In Gatling, this behavior can be simulated with the .resources keyword.

For example, the following script will fetch the "/actions/Catalog.action" HTML page then call the resource_1, resource_2 and resource_3 requests in parallel:

An easier way to simulate this behavior is by using Resources Inferring.

Resources inferring is configured at the protocol level:

Resources inferring tells Gatling to parse HTML pages and fetch resources in parallel to emulate the behavior of real browsers.

Here, the inferHtmlResources takes two arguments: BlackList() and WhiteList() to exclude / include all resources that match the patterns specified. A list of patterns can be given: WhiteList("https://.*.octoperf.com/.*", "https://.*.my-website.com/.*"). You can also switch the BlackList and WhiteList parameters, excluding all blacklisted resources before keeping only the whitelisted ones.

Let’s run our sample PetStoreSimulation script (download here or open com.octoperf.tutorials.one.PetStoreSimulation2.scala in Kraken) with this option activated. In Kraken, we can quickly see that resources are fetched after the HTML page is downloaded: 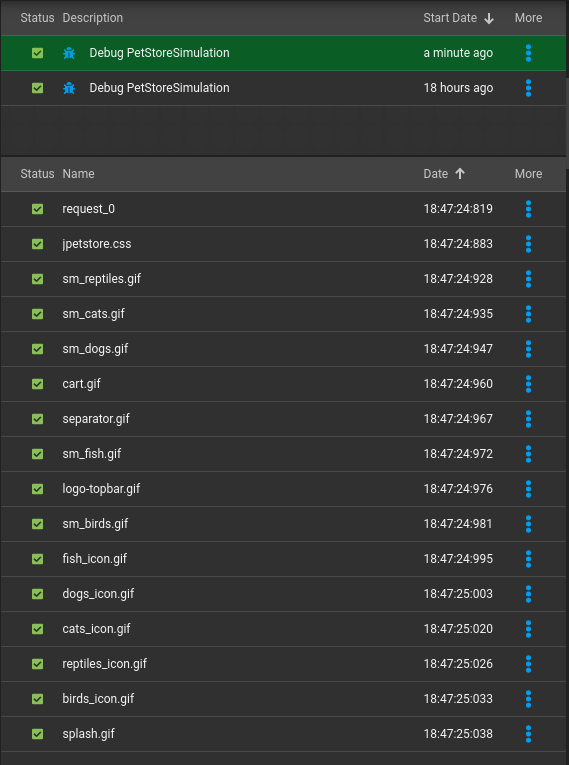 Resources inferring implies that Gatling will parse every HTML response to extract links to images and css file. You may think that this will consume CPU and will potentially limit the number of concurrent user simulated.

Let’s check this out by starting a load test with 100 CCU during 3 minutes:

There is no significant difference in CPU usage between the two tests:

In any case, maintaining a load testing script that references every static resource can become a headache when modifications are made to the Web Application under test. So you should use the inferHtmlResources configuration preferably.

We have seen how to create a simple Simulation script in Gatling (with a single static HTTP request) and how to execute it using Kraken. It you want to get started with Gatling quickly, feel free to check Kraken’s demonstration SaaS. It’s free and your can run simulations and tests without installing anything.

There are many things to improve in order to make our scripts closer to the behavior of real users. As well as many subjects to explore regarding Gatling scripting:

If you have any feedback or question, please leave a comment bellow!