This article is the fourth part of a series of tutorials dedicated to Gatling Load Testing.

Kraken is used to ease the debugging of Gatling simulations and to speed up the process of load testing a fake e-commerce website: PetStore.

We will focuse on POST requests and script modularization:

In the previous blog post we created a realistic Virtual User that browses the store without buying anything. On the contrary, here we are going to simulate the behavior of a user that connects to the web store, searches for items, adds some to his cart and proceeds to the checkout. Then we will combine both Virtual Users to simulate a diverse load on the PetStore.

Most actions to simulate a user that connects to the store are done via POST HTTP requests. But what exactly is an HTTP POST request?

We saw what is an HTTP Request in a previous tutorial. The HTTP POST method has the particularity to send data to the server.

A header field (Content-Type) in the POST request usually indicates the message body’s Media Type. Web applications such as our PetStore typically send POST requests via the submission of an HTML form. The content type of the request varies depending on what is sent or how it is sent:

Modern web application like SPAs made with Angular, React or Vue send POST requests with an XMLHttpRequest instead of a form. In this case the content type can be anything. For instance, it’s usually application/json when sending a JSON object to the server.

Gatling’s DSL addresses all the cases previously mentioned. It automatically sets the Content-Type header for you if you do not specify one: It will use application/x-www-form-urlencoded except if there are body parts, in which case it will set it to multipart/form-data.

The file body.json must be present in the project resources. You can replace RawFileBody by ElFileBody if you need to inject session variables into the body.

Let’s try to apply this to our e-commerce and create a Login request. 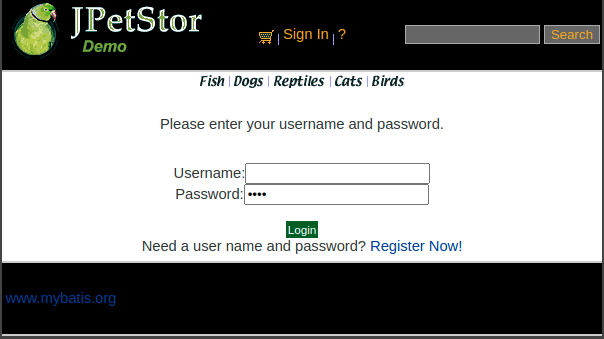 The user types his credentials and clicks on the Login button. A POST request (application/x-www-form-urlencoded) is send to the server. It answers with a 302 HTTP response code and the header location: /actions/Catalog.action to redirect the user to the homepage. Here is a Chrome console view of the Login request: 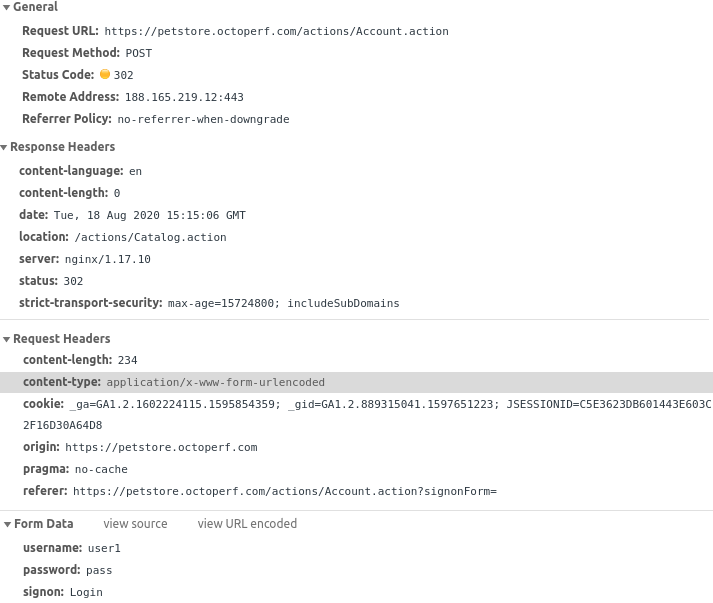 To simulate the connexion of different users, we use a CSV Feeder

It uses the file credentials.csv:

Then we create the first GET request to load the HTML form:

Here we use the keyword .post combined with .formParam to send a URL encoded form with the same parameters that we saw in the Chrome console screenshot. We also check if the message “Welcome ABC!” is present in the response.

The scenario definition uses the feeder to inject the user credentials and chains the two requests:

The complete script for this chapter is available:

Debugging this Simulation in Kraken shows us the three requests:

By clicking on the Login request we can verify the content of the POST body and the headers: 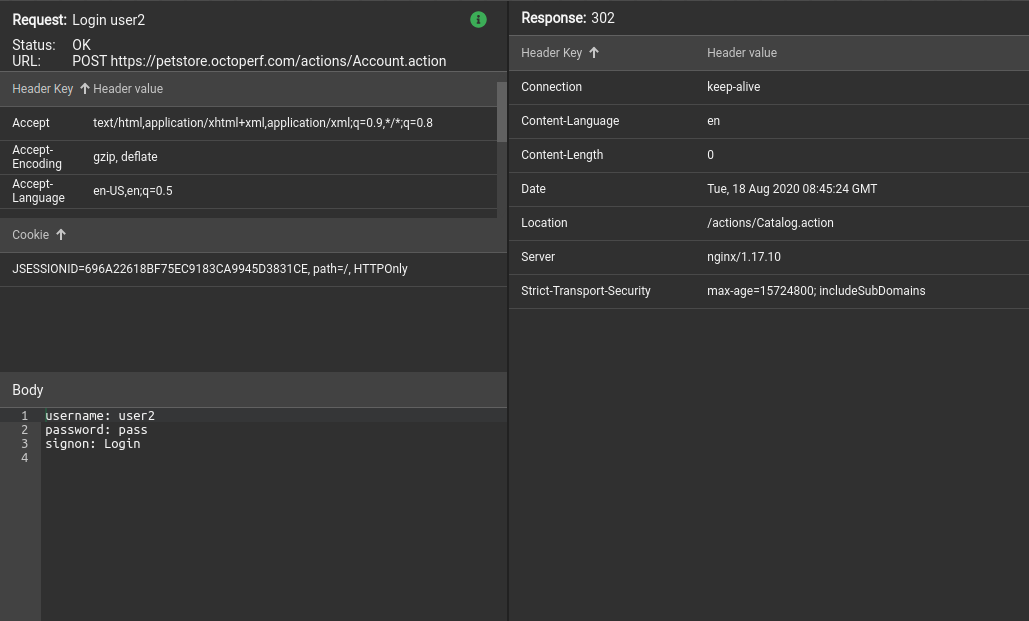 Let’s complete this Virtual User by making it search for an item, add it in his cart and order it.

It’s only simple GET requests with variable extraction followed by form POSTs. Check out the blog post about Gatling Simulation scripts parameterization if you need help with this.

Here is an extract of the script:

The complete script for this chapter is available:

Debugging this Simulation in Kraken displays the successive requests sent: 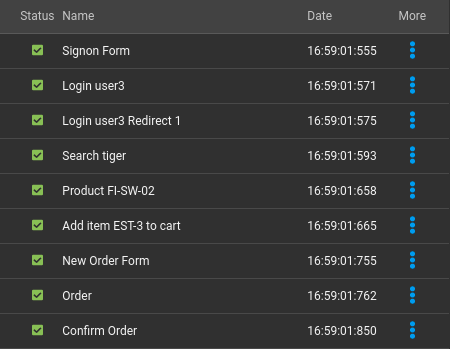 So we have two virtual users, one from the previous tutorial that browses the shop, and one we just created. Our goal is to start both VUs at the same time, in the same scenario. How to do this without duplicating the scripts?

Wether it is in JMeter or Galting, modular scripts is the solution:

The idea is to split our Virtual Users in smaller chunks, for example the login operation or the search. Then we use these test parts in a bigger simulation. A benefit, in addition to producing more readable scripts, is that if the tested application changes you only have to update one script chunk.

From Simulation Class to Simple Object

Let’s start with the Visitor behavior. We get the Simulation from the previous blog post and transform it into a requests and scenario “module”. It’s straightforward since we already declared a var for each request and scenario. We just need to drop the extends Simulation and change the class into an objet:

Then it’s the same for the Buyer virtual user:

We also added pauses on the scenario. Check this chapter about load testing pauses and pacing to know why.

Combining Script in a Simulation

The final step is to import these two objects (request and scenario modules) into a unique Simulation class:

We will simulate 2 concurrent buyers and 10 concurrent visitors during 2 minutes. This is done by setting up the load test using their respective scenario setUp(PetStoreSimulationBuyer.scn.inject(constantConcurrentUsers(2) during(2 minutes)),PetStoreSimulationVisitor.scn.inject(constantConcurrentUsers(10) during(2 minutes))).protocols(httpProtocol).

The complete scripts for this chapter are available:

Launching this test un Kraken on two load injectors shows us that both virtual users are executed.

We only scratched the surface of what could be done in terms of modularization, for example:

In the examples above we only declared HTTP request variables (val searchRequest = http("Search ${term}") ...). You can also declare variables that contain the successive execution of several requests:

And use it in a scenario: val scn = scenario("Buyer").exec(login, search, checkout, logouut).

We have seen how to send an HTTP POST request using Gatling and how to create modular scripts.

If you have any question about this or anything related to load testing with Gatling or Kraken, please leave a comment.